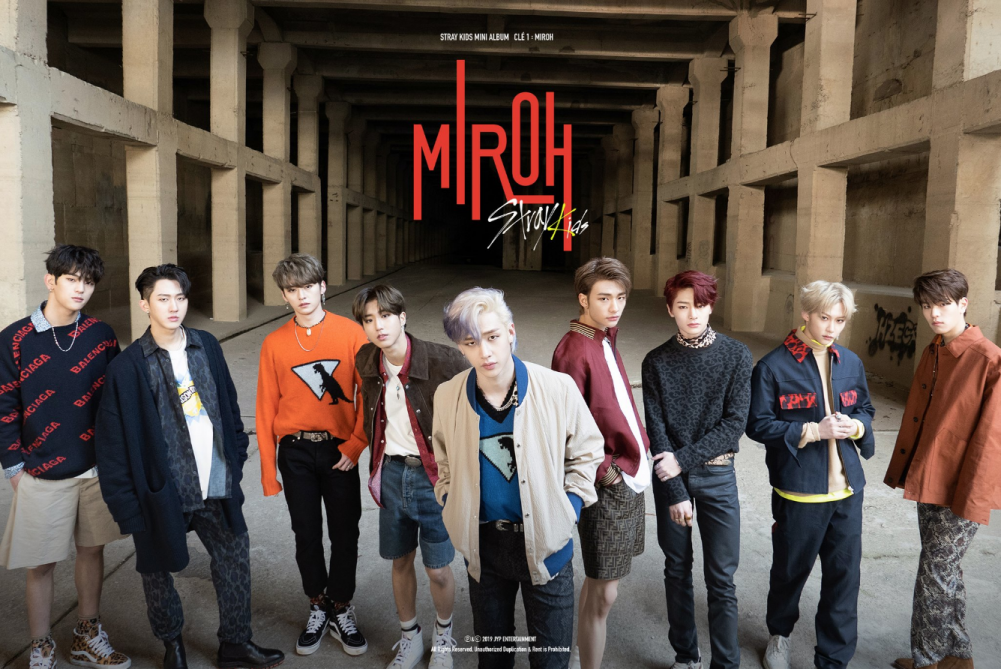 What is up! Wahzine is back and today with Editor Skyys album review of Stray Kids recent comeback!

Clé 1: MIROH is the 4th mini-album by the South Korean boygroup Stray Kids. It was released on March 25th, 2019, with the title track MIROH, and this date is also the same as their one year anniversary since they made their debut.

Now I am not an expert on French but a quick google search told me that The word Clé means key in French. While MIROH sounds phonetically like the word maze in Korean, giving the literal translation to the album name by Key 1: Maze. Which if any of you STAYS want to go full Sherlock on this go ahead and tell em in the comments what it might mean!

Entrance is the opening track to the Clé 1 album and is supposed to get you like a sneak peek of what is to come. Entrance is best described as the sound of a city jungle, and if you have checked out the music video that is very much the vibe Stray Kids seems to be going for this comeback.

starts off with this really amazing transition from the city sounds into Felix deep rap which then leads into. The first verse lead by Chan. From the start to the first verse this sounds like your expected Stray Kids title track. But when the chorus arrived I was surprised, to say the least. I was expecting this very drop to come. But instead, I was met by this scaled back dancehall drop that took a few listened to get used to. Does it still sound like Stray Kids? Yes, very much so.

Now this song was exactly what I had expected from a Stray Kids title track, and it upsets me just the tiniest bit that this isn’t their actual title track because there is so much greatness in this song. But I still understand why this song would fit as a title track at this point in they Stray Kids universe that JYP is building. But this song is probably my second song on the album.

This song evokes so much emotion from the listeners. It’s very much like listening to two different sides of the same person fighting with themselves. An internal conflict so to speak.

This song felt so out of place during my first listen of this album. I still haven’t decided if I love it or not, but I have come to the conclusion that I don’t dislike it. It starts of with this circus melody which I feel like is very misleading because the rest of the song is a lot more reminiscent of Victory Song and older Stray Kids B-sides.

Before listening to this album I saw a lot of hype surrounding this song. And I don’t think it lives up to that hype. Don’t get me wrong it’s a good song. But not the best song on the album in my opinion. I think the reason to why it’s so popular alongside Victory song is because both of them are of the same musical profile as Stray Kids previous albums have been, so people find them familiar.

This is my favourite song on the album. Probably because this is right up my alley. This soft and mellow R&B type sound is my favourite. It’s fun to see Han Jisung producing some tracks for Star Kids as well as Chan. I am excited to see what Han Jisung has in store for us in coming album releases.

I am sad to say that I am disappointed with a comeback and I don’t think it’s right to say so either. I think I wasn’t prepared for the change that Stray Kids seem to have started so soon in their career. But ultimately I understand I think it’s a good move for them to show that they can show many more sides of their charm to the public. Overall I give this album a 6/10 with a special should out to 19 that song is a 10/10.

Pentagon changed up their choreography for Shine!